Are You Ready for the Smart City Evolution?

Your phone isn't the only thing that's smart. With the majority of the world's population residing in urban areas, it is becoming more and more crucial for cities to become "smart." In 1950, only 30% of the world's population was living in urban areas, growing to 54% in 2014 and by 2020, it's expected to reach 66% (United Nations). To adequately support our rapidly growing urban population and economy, we need to continue to heavily invest in the development of smart cities.

What are Smart Cities?

Slowly, but surely, smart cities are becoming reality and are beginning to modify existing urban environments. Imagine that your city can talk to you, tell you which route to take to work, which route to avoid, where to park your car, etc. The purpose of a smart city is to promote a sustainable environment, ensuring its citizens remain constantly informed, safe and live a quality life. In September of 2015, the U.S. government announced that they plan to invest over $160 million in federal research for the new "Smart Cities" Initiative. 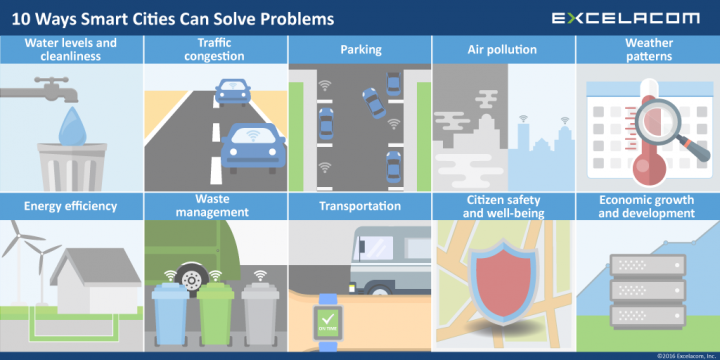 How Smart Cities Can Solve Problems

Every major city is unique in its own way, but each deal with many of the same, if not very similar problems. The following list contains 10 major obstacles faced in many urban areas around the world today that can be solved, or significantly improved through the development of smart cities.

The smart city market has potential to increase to $1.5 trillion worldwide. With most cities still in the infancy phase (61.2%), still researching and exploring the possibilities of transforming themselves into a smart city, it leaves enormous opportunities for service providers (Cronos Group).

As these smart cities evolve, they will demand more and more speed and connectivity to communication networks to support their growing infrastructures.

For more information on how you can be a leader in the development of smart cities, please contact Excelacom at marketing@excelacom.com.